As Indonesia pursues a path of inclusive development in the modern age, two interrelated factors will play a key role in sustainably unlocking this archipelago’s potential: the preservation of its founding Pancasila ideology, and cultivation of its rich cultural heritage. Civil society offers a number of innovative programmes we can look to for inspiration—with diverse models ranging from peace and tolerance initiatives, to character education, to village-based ecotourism.

On the 2nd and 3rd of December 2019, nineteen individuals from eleven organisations headed to Garut, West Java, with the goal of learning from two very different models of inclusive development spearheaded by Peace Generation and Star Energy (an affiliate of Bakti Barito): the first focused on peace education, and the second on integrated village development and ecotourism. The learning visit, co-organised by APC and Filantropi Indonesia’s Education Cluster as part of an ongoing series, was attended by a mix of education sector players from various foundations, nonprofits, corporates, and even a think tank, but who shared a common desire to gain deeper insights about effective peace education and cultural ecotourism.

Upon arrival in Garut on Monday, 2 December, we met and learned more about Peace Generation (PeaceGen) through games, personal testimonies, and interactive discussion with Co-Founder Irfan Amalee and his team. A social enterprise committed to promoting peace through creative media and outreach, since 2007 PeaceGen has trained over 5,000 teachers and community leaders, and reached youth in 107 cities and districts across Indonesia. We learned about PeaceGen’s 12 Basic Values of Peace which span three main categories: Accepting Self, Appreciating Diversity, and Resolving Conflict. 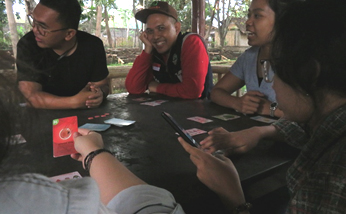 Every year, Peace Generation introduces basic values of peace to hundreds of youth across Indonesia every year through fun, yet thought-provoking board games. While the games are usually targeted toward secondary school and university students, we too had our fair share of fun and learning!

Our own grasp on these twelve values were immediately put to the test as we divided up into groups to play one of Peace Generation’s trademark Boardgames for Peace, “Galaxy Obscurio”. As we entered into an alternate universe and began our mission of collecting points while trying to minimize the spread of deathly viruses that could lead to “game over” for all, we quickly learned that collaboration is no easy feat. Within the allotted thirty minutes, all four groups failed to save their universes from extinction! After discussing the lessons learned from this simple game, we were even more intrigued to observe firsthand how PeaceGen successfully instills basic values of peace among the next generation.

After a hearty Sundanese dinner and a good night’s rest, we embarked the next morning to PeaceSantren Welas Asih, PeaceGen’s first, recently-established “lab school” in Samarang, Garut. We were not the only guests that day. The PeaceSantren was also hosting ninth-graders from SMP Kristen Yahya in Bandung, as one of PeaceGen’s trademark initiatives to “break down the walls” between youth of different faiths through interactive activities including song and dance, traditional games, and small group discussions. During a discussion with teachers from both schools, we heard inspiring stories about how they had applied principles from their Peace Educator training into lesson content, classroom management techniques, and whole-school commitments. These principles applied not just to interfaith tolerance, but also positive self-image, anti-bullying, and disability awareness.

Yet, despite PeaceGen’s standing track record in peace education, collaboration with other organisations is crucial in the effort to increase their impact and scale. Senior Program Manager Miftahul Huda shared that most of their training participants are still recruited through word-of-mouth. Through strategic partnerships, PeaceGen will next focus on reaching younger students through training preschool and primary school teachers, and also supporting the government on the national movement to strengthen character education (Penguatan Pendidikan Karakter).
In addition to promoting peace and inclusion among groups, another key for Indonesia’s sustainable development is culivating local potential and culture through means such as ecotourism. Led by Dian Purbasari from Yayasan Bakti Barito and Panji Pranadikus from Star Energy (a subsidiary of Barito Pacific Group), we next visited Desa Wisata Saung Ciburial, runner-up of a national ecotourism competition earlier this year from the Ministry of Village Development. Since 2009, Star Energy (previously Chevron Geothermal)’s work to support the village through capacity building and community development efforts has helped enable additional income of 8 million IDR per month and, more importantly, increased social cohesion in the village. Upon our arrival, we were warmly welcomed with traditional music and martial arts performances, and each unleashed our “inner child” as we joined the youth in traditional games. Nowhere did we see kids occupied with gadgets: and indeed, this is one of the principles the village is working hard to uphold. 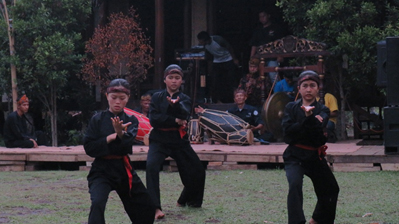 In addition to traditional games, another tradition that this “Desa Wisata” strives to uphold is the martial art of “silat’. Older, more experienced youth often become instructors for younger children.

Such transformations and changes of mindset do not happen instantly, Panji reminded us. A key success factor? Finding a key local leader or “public figure” to drive and own the change process. This has been true not only of the Desa Ciburial programme, but also in another of Star Energy’s trademark programmes that Panji presented about, Desa Caang: an integrated village development initiative focused on supplying affordable electrical energy and other holistic community development efforts in the villages around Star Energy’s operations. Panji also shared that parent organisation Yayasan Bakti Barito continues to challenge the Star Energy CSR team to ask the hard questions about long-term sustainability, and to be intentional about having a clear exit strategy.

Before heading home, the group wrapped up learnings and discussed future collaboration opportunities in a reflection session facilitated by Dimas Purnama from Tanoto Foundation (leader of FI Education Cluster) and Felicia Hanitio from APC Indonesia. Participants contributed diverse ideas: for example, Dompet Dhuafa was interested to help strengthen the literacy program in Star Energy’s partnering villages, while Yayasan Hati Suci and Tanoto Foundation saw opportunities to incorporate and develop PeaceGen’s module for early childhood education (PAUD) teacher training online and offline. We look forward to seeing the partnerships that will develop out of this study visit and visiting more innovative organisations in 2020!